Note: Before joining a group or class for the first time, you are advised to verify that it is meeting as scheduled.

Zumba-certified dance with occasional use of weights. Taught by Angela Zucker, in person or via video. Equipment provided.

Transmission Meditation is a service activity that benefits the planet as well as one’s own evolution.

Like pizza? Got dough? Come on down to the Greenwood Community Center almost monthly about 3:00 p.m. Check the Calendar of Events or email Kevin to find out when the next one happens. Bring your own dough and toppings and bake it in the wood-fired outdoor oven. Share some with your neighbors and sample some of their creations. You’ll eat good and have fun, too. Feel free to bring along some bread dough to bake, too. 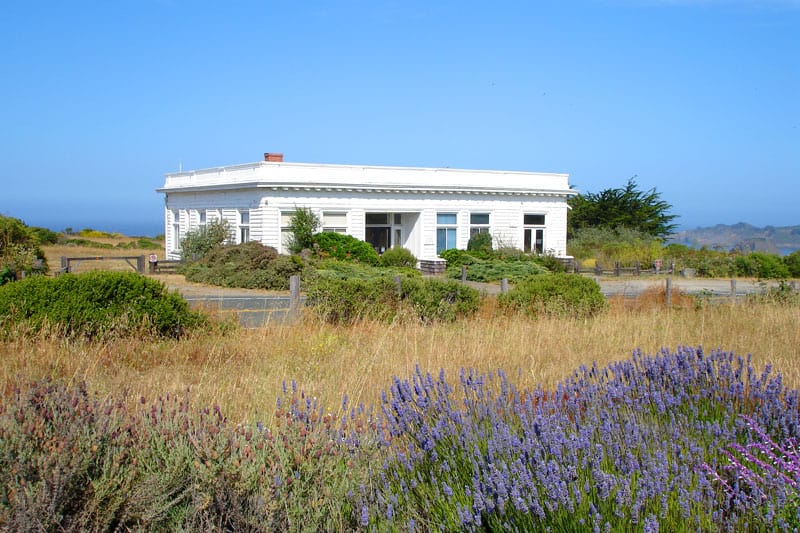 Elk’s early history is displayed in the Greenwood State Beach Visitor Center/Museum located in the middle of town. The building once housed the town’s post office and was the original office of the L.E. White Lumber Company, which operated from 1884 to 1916. The company was purchased and operated by the Goodyear Redwood Company from 1916 until its closure in 1930. After more than 70 years at this location, the post office moved across the street to a new facility in 1994, and the building was acquired by California State Parks.

The showpiece of the museum is a mural occupying the full length and height of the north wall depicting the Greenwood Wharf built by the L.E. White Lumber Company and destroyed by fire in 1938. The wharf had a unique design as it was built on a series of rocks outcropping into the ocean. Schooners would tie to the wharf while loading redwood lumber, tan oak bark, railroad ties, and passengers, all destined for San Francisco. Well-known muralist, Michael Cole, painted the mural.

The central theme of the museum is of Greenwood as a lumber town in the late 1800’s through the early 1900’s. There are artifacts from the lumber camps used to harvest the redwoods and bark from the tan oaks. The gallery room and main museum are filled with photographs of early settlers of Greenwood and nearby Cuffey’s Cove, the lumbering operations, and the town itself. Another room is filled with period furniture – including an organ, stove, washing machine, steamer trunk, and bathtub.

Staff is available to answer questions and relate historic events. Entrance to the museum is free of charge, but donations are appreciated.

Available for sale are postcards and books covering a wide range of coastal subjects, Pomo Indian culture, and the history of Greenwood.

After years of deterioration and concern about its potential health hazard, the exterior of the historic visitor center/museum was repainted and preserved in 2009. Read the story about how this was accomplished.

Elk is fortunate to have not one, but two public beaches within easy reach. Both offer spectacular views of the Mendocino coastline and Pacific Ocean.

Located west of Highway 1 in the heart of Elk, Greenwood State Beach is prized for picnicking, beachcombing, nature viewing, and gentle walks.

The beach has an amazing history as the site of early Greenwood/Elk’s largest sawmill, which you can learn about at the Visitor Center/Museum just north of the parking lot. There you can get a glimpse of what life was like in this lumber town during the late 1800s and much more. 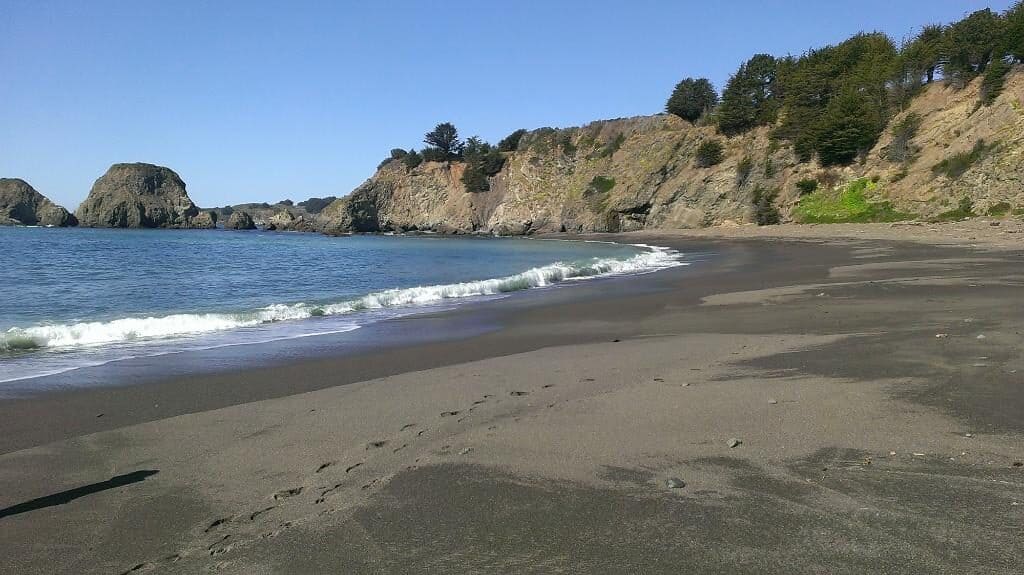 Greenwood State Beach provides short walks along a grassy bluff accented by a few cypress trees, or down a gentle trail to a driftwood-strewn sandy beach in a protected cove at the mouth of Greenwood Creek. The half-mile trail descends from a roadside parking lot and forks. The right fork leads to a picnic area with an expansive view. The left (main trail) continues downhill to another picnic and view site, then reaches the pebbly shores of the sheltered beach. Just offshore lay several sea stacks – giant arches and jutting rock formations. The one to the left is Gunderson Rock. To the right is Wharf Rock, with the flat top where a ship-loading wharf was once anchored, and Casket Rock. 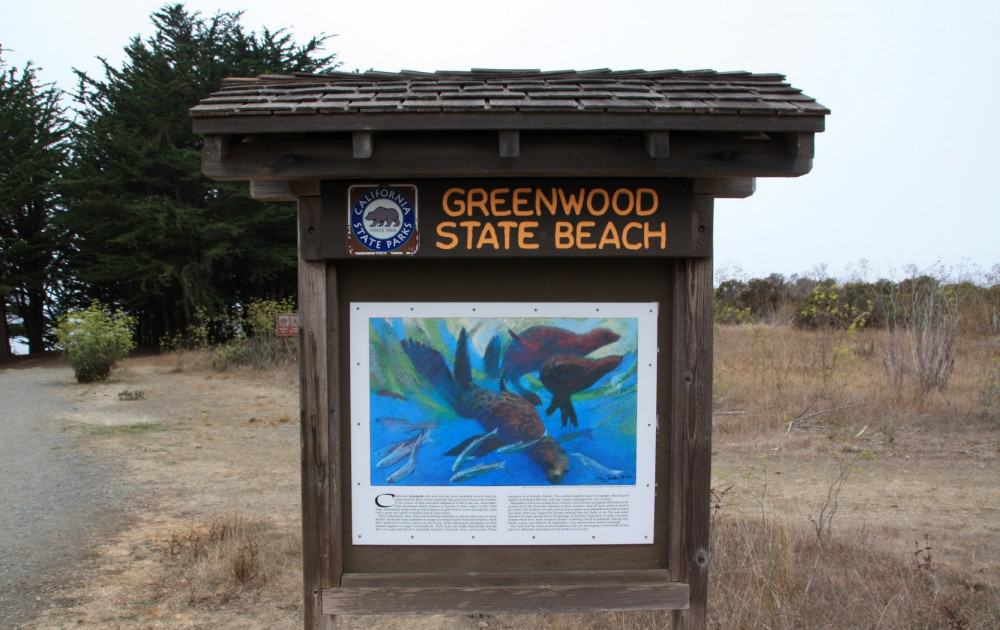 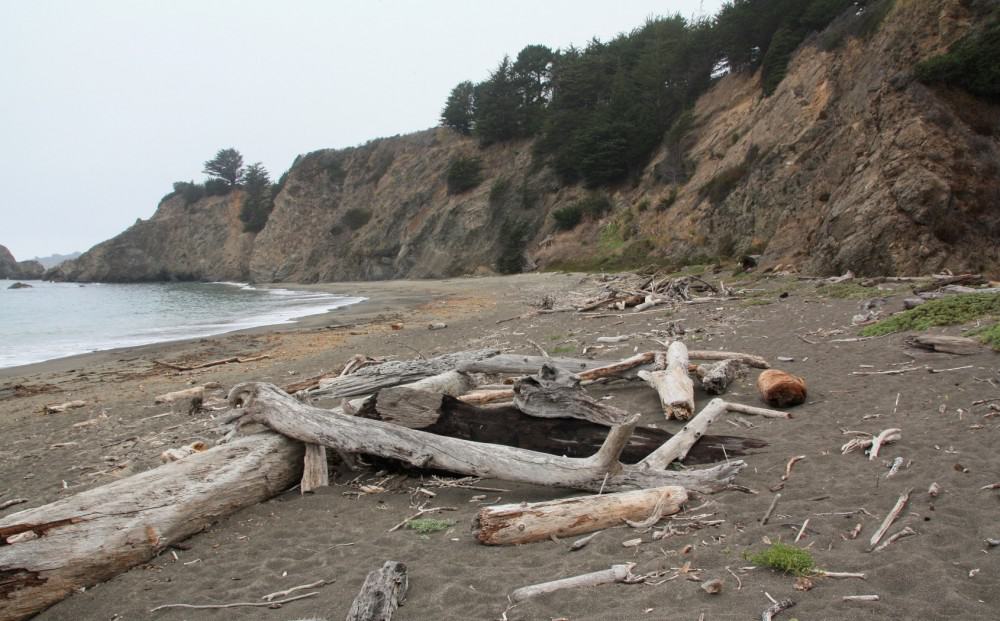 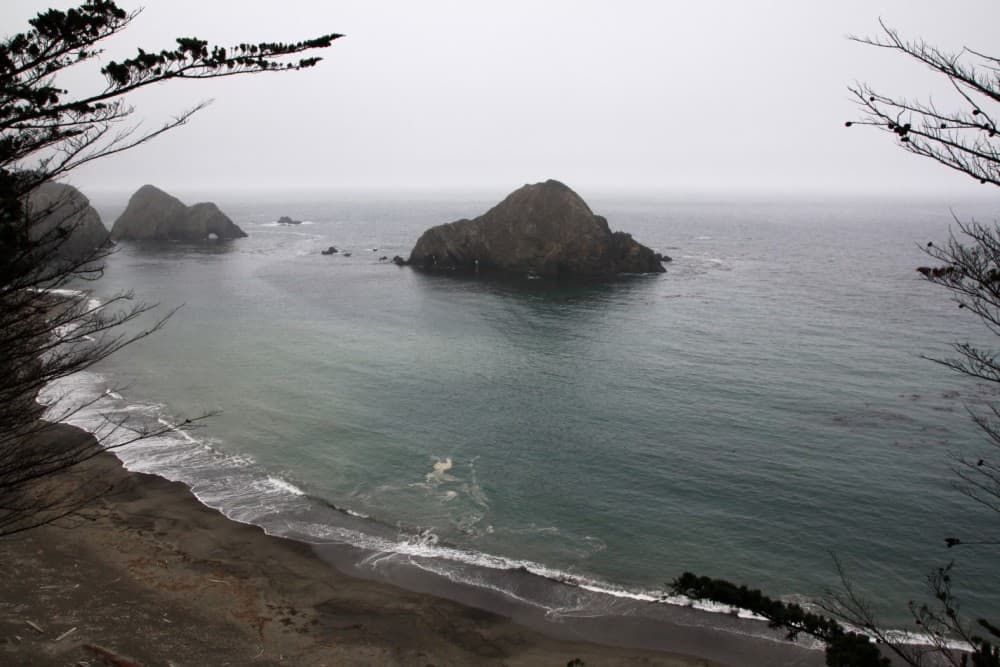 Navarro Beach, part of the Navarro River Redwoods State Park, is located at the end of an eleven-mile-long “redwood tunnel to the sea” where Highway 128 meets Highway 1.  It offers easy access to picnicking, primitive camping, beachcombing, and hiking on a short but dramatic trail climbing along an abandoned section of the coast highway.

Navarro Beach was once the scene of much haggling between State Parks and a homeless camp.  An era of free, unlimited camping ended in 1994 when characters such as Diver Dave, Spider, and Mayor of the Beach, Robert Jarrell, were evicted from their old trailers, buses and tents, along with an Indian who lived out on the point in a tepee. 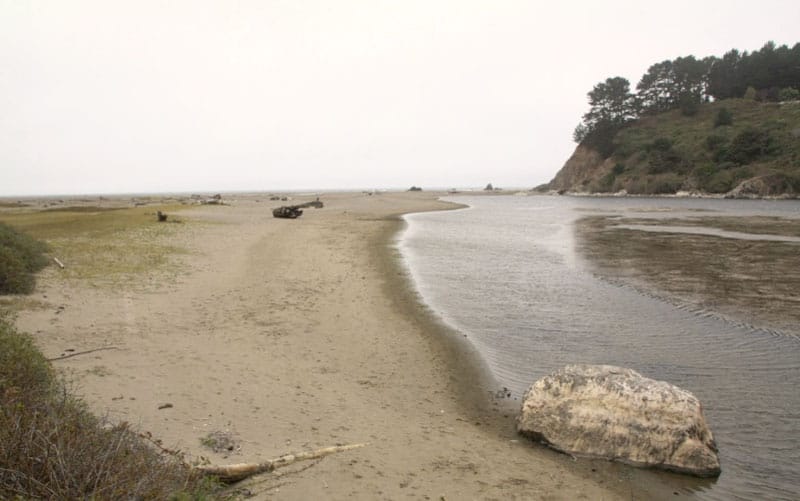 A ¾-mile entry road is located on the south side of the Navarro River Bridge.  The road leads past the few buildings that remain from a nineteenth century logging town called Navarro, which thrived there from the 1860’s to the early 1900s, to a gravel parking lot.  The beach is a broad, flat sandy beach at the mouth of the Navarro River, which spreads out into a broad lagoon before spilling into the Pacific Ocean.  High bluffs surround it.  Offshore are several sea stacks, including the Arch of Navarro.  Harbor seals can often be seen in the mouth of the river feasting on spawning salmon and steelhead.

For more information on these and other area beaches, visit California State Parks or call (707) 937-5804. 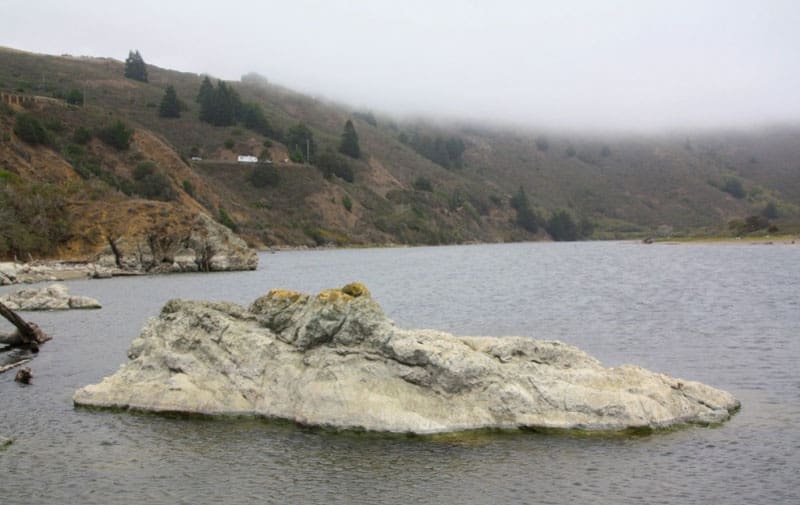 On March 11, 2014, President Barack Obama designated the 1,665-acre Point Arena – Stornetta Public Lands as part of the California Coastal National Monument. Twenty minutes south of Elk, the new national monument includes the mouth and estuary of the Garcia River along with jagged bluffs, onshore dunes, tidal pools and meadows. It provides habitat for migratory waterfowl, shore birds and raptors as well as several fish species, including the imperiled black oyster catcher and chinook and coho salmon. This latest addition to the 1,100 mile long National Monument is distinguished by being the only land-based portion of a monument comprising over 20,000 rocks, islands, exposed reefs, and pinnacles that stretch from San Diego to the Oregon border.

President Obama’s proclamation protects the Point Arena – Stornetta Public Lands against development and ensures the area will be preserved for future generations.

As a side trip from Elk, visitors can enjoy hiking, picnicking, bird-watching, and whale-watching from the cliffs, as well as visit the adjacent Point Arena Lighthouse and Manchester State Beach. 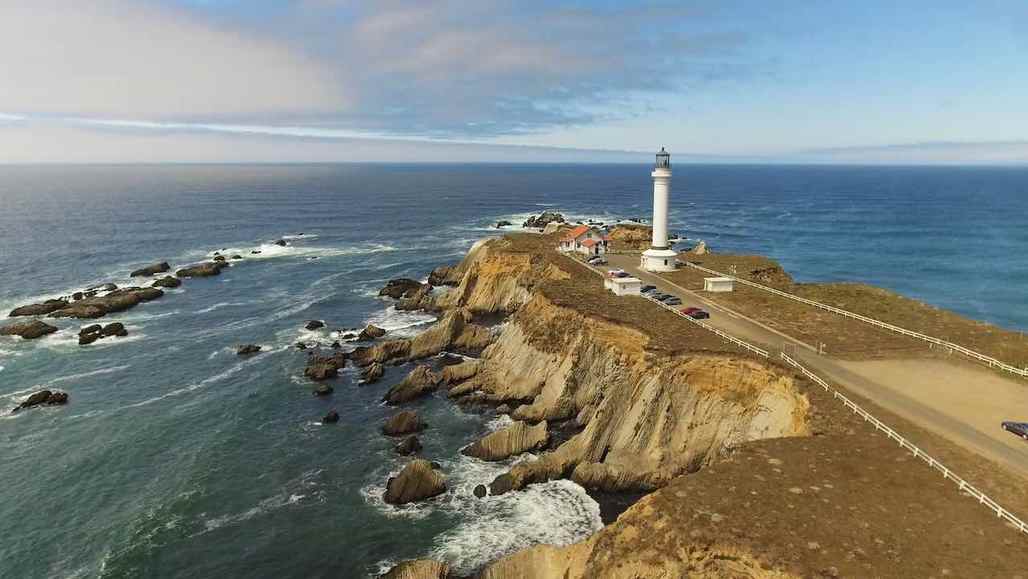 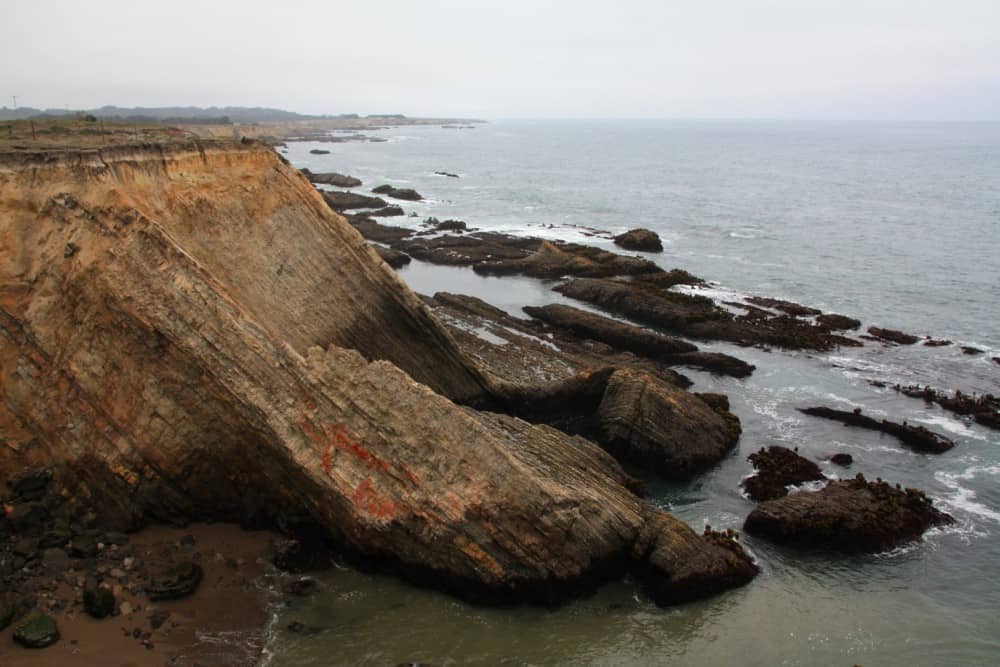 MendoParks
Information about activities, events and programs at the California State Parks located in Mendocino County

MendocinoFun.com
“The discriminating guide to adventure on the Mendocino Coast”

Mendocino.Com
Information on hotels, restaurants, things to do, and weddings on the Mendocino Coast